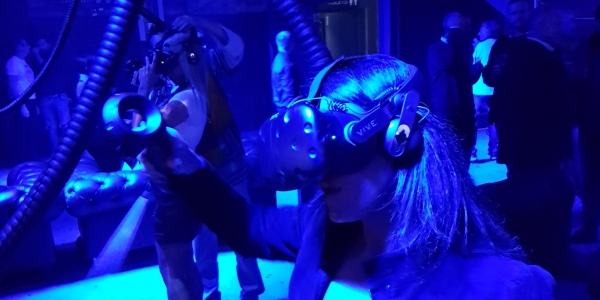 December saw Acid house pioneer, DJ Danny Rampling, celebrating the 30th anniversary of the opening of his seminal clubnight Shoom. Our own William Latham took MutatorVR along for guests to experience the immersive, evolutionary virtual reality artwork in a danceclub setting for the first time.

The first Shoom was thrown in a 300 capacity basement fitness centre in 1987 aiming to capture the hedonistic experience of Ibiza's Summer of '87. That night was marketed with a simple smiley face logo - which became ubiquitous to the acid house explosion.

Now, 30 years later, Danny recreated the heady era for an anniversary event at London’s Southbank, celebrating the music and the culture surrounding it, with some added extras that suggest the future of clubbing - dancing with VR responding to your individual dance moves.

William said of the event; “VR is the obvious extension for the chill-out room, where putting on a VR headset to experience an immersive alternate reality, that responds to your tiniest movements, seems like a natural fit. Our headsets dangle from the ceiling on long black flexible tubes which connect the viewer’s head to the computer in the ceiling, like strange umbilical cords, giving the set-up a sci-fi feel.  It also means the viewer can dance freely. The next extension we’re working on is to sync the software with any audio track, picking up the BPM, mood and melody, which will be calibrated to suit their taste, so that eventually the viewer can remix the track depending on how they move –  their body shaping their own audio/visual experience.”