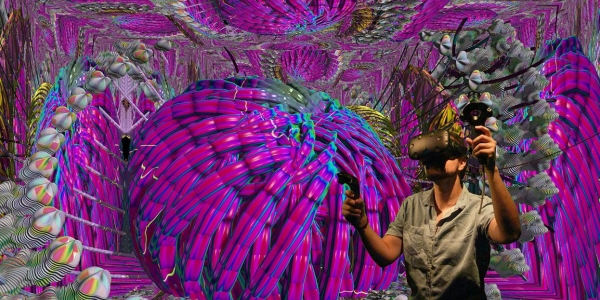 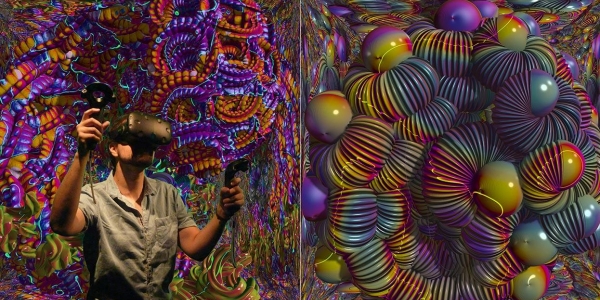 Visitors to the inaugural New Scientist Live event, were the first to experience William Latham’s Organic Art in Virtual Reality.

The New Scientist Live event was created by the team behind the world’s best-known science magazine, and was a four-day festival of ideas and discovery for all the family.  British astronaut Tim Peake opened this huge and exciting event, held at London’s ExCel on 28 September to 1 October with over 22,000 visitors attending.

The VR experience surrounds the viewer and places them inside strange evolving forms resembling sea anemones, ancient ammonites and multi-horned organisms with which they can interact. The forms the viewer sees are reminiscent of those one might encounter in an alternative alien evolution.

William says: “VR is in a really exciting phase, now it’s completely new technology, it’s a new frontier and what we are finding when people put on their VR headset, it’s like they’ve stepped into another dimension where their world is completely replaced with a new space, a virtual space”

Organic Art 2016 VR derives from the pioneering work of Latham and mathematician Stephen Todd in the late 1980s and is now fully immersive, enabled by HTC Vive VR headsets and high-resolution NEC video wall screens. Bred and crossbred in software from multiple parents, Organic Art’s bizarre forms are created by a process of artistic evolution driven by human aesthetics.

The aim of Organic Art VR is to give viewers a surreal, interactive and immersive experience in which they shape the world around them.

We sent along York Theatre, Film and Television student, Finbar Somers to capture some of these experiences.  You can see his film here

William will now be taking his Mutator VR to The East Gallery at Norwich University of The Arts for a two month exhibition 15 November 2016 – 14 January 2017.

DC Labs are very excited about the widening reach of this astonishing and visually stunning work and really encourage you to check it out, especially if you haven’t experienced VR before.

The Art of William Latham
www.gold.ac.uk/news/the-art-of-william-latham/