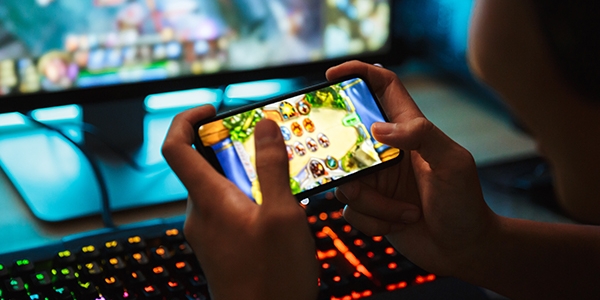 Researchers from DC Labs and the Department of Computer Science have developed a novel technique, the distraction recognition paradigm, to quantify how well a game holds a player’s attention.

The technique builds on existing measures such as questionnaires and eye tracking technology, to provide an enhanced picture of player engagement and inform game design and research.

The technique involves placing a series of frequently changing pictures around a video game. When participants have finished playing the game they are tested to see how many of the pictures they recognised with the idea being that if people are engrossed in the game, they are not likely to recognise any of the pictures afterwards, even if they have looked directly at them.

To test their hypothesis, researchers conducted different experiments using a video game they developed based on the popular puzzle game, Two Dots.

Researchers undertook a second series of experiments to examine the impact of different game design elements on engagement, including the pace of the game and the difficulty level.

Notably, the results of these experiments indicate that even very simple games that present no real challenge, can still hold the attention of a player. There was hardly any difference in the amount of engagement between participants who played the challenging version of the game and those who played the easy to progress version.

The research contributes to explanations about why such a large proportion of people play games globally, and in particular mobile games. Even if a game is not fast-paced or exciting, it can still provide a means to take a break and step completely away from the real-world.