Julian originally intended to study History at University but claims that switching to Archaeology and Anthropology (which he studied at Cambridge) was one of the best decisions he ever made.  He  first came to York to take part in the Coppergate Viking excavations, but after a brief spell at the University of Leeds he returned to York in 1986 to lecture on Anglo-Saxon and Viking archaeology.

He is Co-Director of Internet Archaeology, an electronic journal developed in York, and Director of the Archaeology Data Service, the national digital data archive for archaeological research.

Within DC Labs, Julian provides a steer on digital applications to the heritage environments.

Julian is also Director of York's Centre for Digital Heritage, providing a strong collaborative link for DC Labs, was a founding Director of The White Rose College of the Arts and Humanities (WRoCAH). 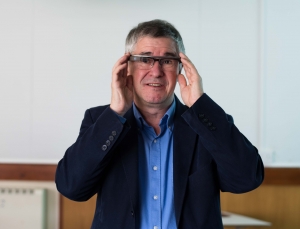