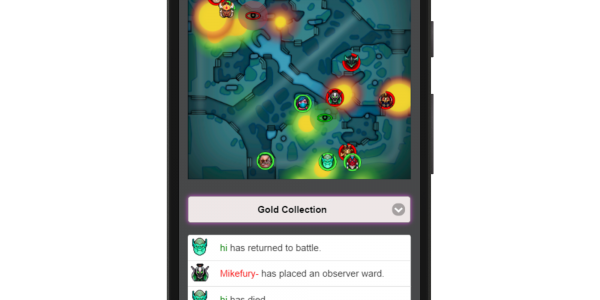 Esports matches are fast and furious and can be difficult to understand. How can we make a system that leverages the richness of esports data to improve viewers’ understanding and enjoyment of esports broadcasts?

Games which are used as arenas for esports competition frequently have complex rulesets, and high-level play of these games has its own idiosyncrasies and strategic elements which can make esports matches difficult to follow for viewers who are less familiar with the game. Esports viewers must therefore develop a set of skills and a knowledge base to more fully understand esports matches, and this presents a unique challenge for broadcasters who deliver this content.

Traditional sports broadcasts typically include an accompanying live commentary, graphical overlays, and, increasingly, some form of data visualisation. These visualisations can range from graphs charting player performance, to systems like ‘Hawk-Eye’, which is used in tennis to display a 3D representation of a ball’s trajectory and bounce on the court.

One of the distinguishing features of esports in comparison with traditional sports is that, due to the computer-mediation of esports, the matches played in this context are inherently data-rich; every kill, every movement, every mouse click, and every button press is captured by the game’s replay for review, manipulation, and exploration. Data visualisation is currently used in a limited capacity by esports broadcasts, but there is an opportunity to create richer implementations.

The ‘Glance’ project stemmed from the idea of using data visualisation to improve viewers’ understanding and enjoyment of esports matches; the project produced a framework for transmitting and visualising live esports data through a ‘second-screen’ smartphone application. This interactive mobile application makes esports matches easier to understand for viewers by providing a data-driven overview of the match ‘at a glance’ that updates while they’re watching a live broadcast. Glance visualises data from Valve’s MOBA (Multiplayer Online Battle Arena) DotA 2, a popular arena for esports, in part because Valve is one of few game developers that provide some access to in-progress match data.

The Glance project explores an opportunity for esports broadcasters to engage their spectators through data visualisation, and produced a working framework for transmitting live data from matches to a web-based interactive application on viewers’ smartphones.

Jamie is a final year student studying Interactive Media in the department of Theatre, Film and TV at the University of York.