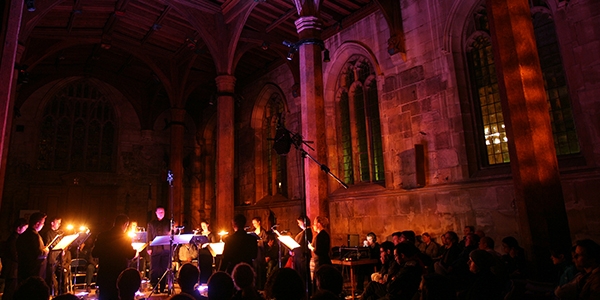 A collaboration with the Departments of Music, Electronic Engineering, and Archaeology is aiming to create new audience-centric musical performance through virtual acoustic technology.

The acoustics of a space have always been central to musical composition, but it has previously been impossible to use the acoustic space dynamically as part of a creative palette.

Augmented reality audio technology can now facilitate the creative exploration and implementation of acoustic space, whether real or imagined, as part of the compositional and musical performance toolbox.

A prototype web-based application (app), developed through a DC Labs summer school internship, allows a listener to control the positioning of multiple pre-recorded vocal tracks in the architectural acoustics of a chosen space around the listener’s head on the fly.

Architexture 5 will develop the app to incorporate effective user interaction during real-time performance, enabling creative exploration of the impact of acoustic spaces and our relationship with them as composers, performers and audience members.

The project will focus on the unusual and impressive acoustics of the York Guildhall (the venue for Architexture 1).

The app will be developed using using pre-recorded audio stems, designed and composed to highlight elements of the Guildhall's.

Live performance workshops with singers and audiences using the app with the Guildhall’s virtual acoustic will also inform developments.