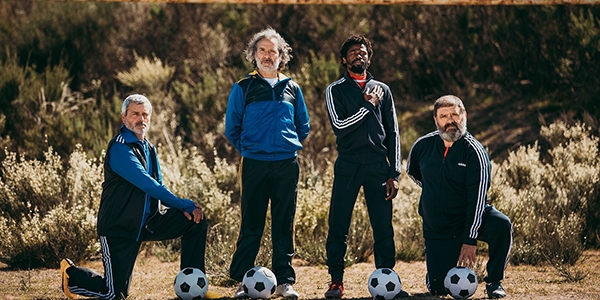 As part of the EC funded PlayOn! project, DC Labs is providing expertise in game design to help theatres incorporate immersive technology in a series of interactive productions.

One recent prodution emerging from PlayOn! is FUTEBOL, a stage show about the social history of football, the role it has in society and our lives, and how it reflects both the best and worst of humanity.

Throughout the project DC Labs has worked closely with Portuguese theatre company Teatro O Bando and collaborators Teatro Montemuro to support the design and development of the production.

Directed by João Neca, with the support of Ben Kirman and Ben's research into game design and the spectator experience of football (and other sports, see Weavr), FUTEBOL developed into an interactive experience where the audience are drawn into the narrative as fans.

Each performance of FUTEBOL becomes a match between the two teams of Vale (Valley) and Serra (Mountain), and audience members choose to be a fan of one or the other. Fans are issued newspapers, team scarves, sing along with chants, and are invited to download a custom mobile app to use alongside the show.

As the show progresses, the audience is given the opportunity to substitute different actors into different roles in the story. Based on these decisions, and how the story goes, goals may be scored by either team. At the end of the “match”, the results of the show feed into a live league table, tracking results over the season of performances. Audience members use the app as a souvenir, and follow along with later matches, to see how their team is doing and who will become the season champion. 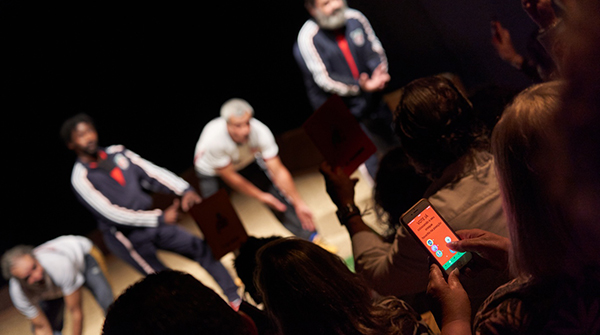 FUTEBOL featured at various festivals and venues across Portugal in 2021 and further productions are scheduled for 2022.

The app is available (in Portuguese) for smartphones on the Google Play store and Apple App Store.

PlayOn! is a large European funded cultural project looking at immersive and interactive storytelling in theatre for young audiences (16-29). The first phase of the project saw the nine theatre partners explore the use of game design in their dramaturgical work, guided in part by DC Labs. The PlayOn! Project continues until 2024, and DC Labs is currently supporting partners investigating immersive technology including VR, AR, immersive sound and projection.