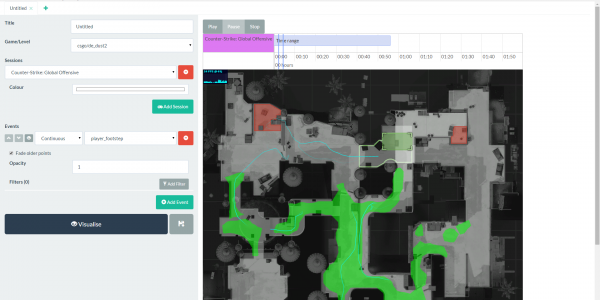 Behavioural data from games are highly complex and difficult to visualise and make actionable. Customisable visualisation tools for esports provide a solution.

As data-driven analytics become an increasingly integral part of developing, researching and, even playing games, the need to be able to conduct effective and more in-depth game data analysis grows remarkably. This project expands an open-source game data visualisation system to incorporate clustering aspects of machine learning into the data analysis and visualisation of this data. This means grouping players with similar play styles which enables the further analysis how play styles vary and investigating why players follow or deviate from expected player actions. By taking a data-driven approach, it is possible to compare and contrast how players act in different scenarios throughout a game.

Crucially, by visualising the results, this kind of analysis can be opened to a market beyond professional data analysts, to esports players and game developers to understand different approaches to playing a game. It becomes possible to visualise a group of players who act in a similar way alongside other players who deviate from this to understand the differences in behaviour.

The open-source nature of the project allows future users to further build upon the data analysis techniques or customise the existing system for different games. The goal of the project was not to find a specific model for a certain game but to build a customisable analysis and visualisation system that can be the basis for further work in the future. Overall, the system enables users to better visualise game data and begin to understand the differences between gameplay experiences. The system was tested with real-world esports gameplay data to maximise the system’s relevance to real users and demonstrate the possibilities for much more detailed analytics and research in the future.

Michael and Saul were final year students studying Computer Science at the University of York.